The Rath Yatra festival in Puri is the only occasion when non-Hindu devotees, who aren’t allowed inside the temple, can get their glimpse of the deities. A mere glimpse of Lord Jagannath on the chariot, or even to touch the chariot, is considered to be very auspicious. It makes millions of people to come during June and July of every year to spend a religious holiday at this tiny city of Indian state Odisha.

The massive number of devotees that flock to the festival does pose a safety risk. Lives are often lost in the immense crowd, so extra care should be taken. To be in safe side here we are suggesting you to book your hotel in Puri on advance basis. Go for good hotels. If you have booked early in advance then you will get minimum price for your accommodation and expenditure. The best hotels and resorts are providing wide range of Puri Rath Yatra tour packages, so that instead of facing rush, crowd and being lost, better to be with hotel management, where the staff will arrange everything as per wish and let you enjoy a hassle free Rath Yatra. One of such resorts in Toshali Sands, situated on Marine Drive road provides best service and hospitality to its guests. 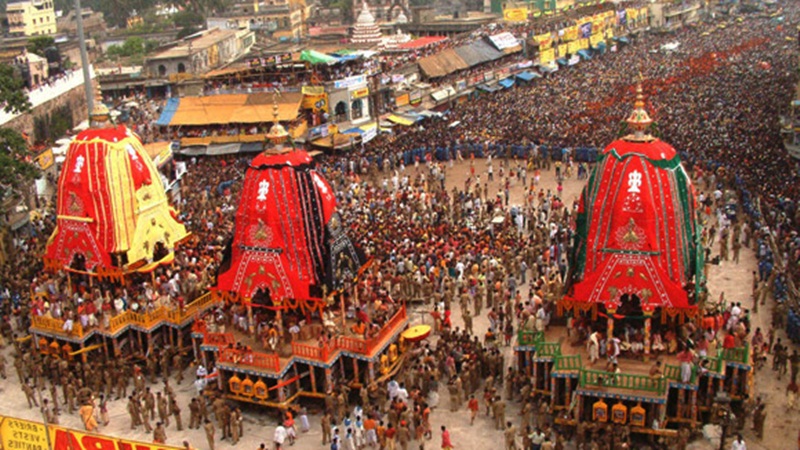 Here are important dates to book your Rath Yatra programs according to that.

NiladriBijay: July 26. Deities are placed back inside Jagannath Temple.

Book your Puri Rath Yatra tour package at Toshali Sands and enjoy a great holiday within 100% spirituality and relaxation under supreme luxury.

Lord Jagannath – The God of the Universe has different forms. He adopts these forms according to the necessities of his devotees. In Jagannath Temple Puri; the Lord is adorned with cotton and silken fabrics, gold ornaments, flowers, precious stones, leaves and sandalwood every day. END_OF_DOCUMENT_TOKEN_TO_BE_REPLACED