Dussehra is dreived from Dasha-Hara “remover of bad fate”. It is celebrated on the tenth day of the bright fortnight (Shukla Paksha) 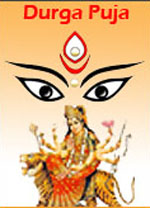 of the Hindu autumn month of Ashvin. Lord Rama appeased Devi Chandika seeking to defeat and kill Ravana. On Dussehra day Ravana was killed in the battlefield and this day celebrates the victory of good over evil. In another mythology Devi Durga killed mahisasura on Dussehra day.

It marks the traditional season of autumn. Soma Yajnas are performed with the Maha Surya Mantras and the Aruna Prapathaka of the Yajurveda. The effect of these mantras is to keep the heart, brain and digestive functions of the body in balance. The imbalances in these occur in the absence of adequate sunlight in the winter months.

In parts of Northern India it is traditional to plant barley seeds in earthen pots on the first day of Navrathri. On the day of Dussehra,
the nine-day old sprouts (called noratras or nortas) are used as symbols of luck.

In Uttarakhand, Dasshera festival starts with the performance of Ramlila which is itself unique as it is based on the musical rendering of the katha or story of Lord Ram based on the theatrical traditions set by Uday Shankar while on his stay in Almora these traditions were further enriched by Mohan Upreti and Brijendra Lal Sah. Known as the Almora or Kumaon style Ramlila has been recognised by UNESCO in its 2008 report as one of the representative styles of Ramlila in India.

Actor Pran, the Bollywood villain started his ‘acting’ career on Shimla where he played Sita to Madan Puri’s Ram in the local staging of “Ramlila” 🙂

Kullu dussehra at the Dhalpur maidan is now famous for the spectacular procession and fairs. The Gaddis – semi nomadic shepherds comes down to perform. In Himachal Gods are carried in palanquins to local fair grounds. During the Kullu festival some 22 deities make their way to the fair grounds. The history of this festival goes back to 17th century when king Jaganand installed an idol of Lord Rama on his throne. Since then Lord Raghunath is the presiding deity of the valley. Dussehra in Kullu begins after celebrations are over elsewhere in the country, because, the legend has it that “Lanka Dahan” was done on the day after a full moon night, which according to the Hindu calendar falls after the seventh day of the Vijyadashmi. Chamba and Nurpur also has similar celebrations.

However, Dussehra is not celebrated in Baijnath dham of Lord Shiva. It is believed that Ravana put a consecrated Linga on his  journey back to Lanka. Lord Shiva had actually asked him not to put it down anywhere. Ravana inadverently put it down in Baijnath and it is there ever since. The current temple was constructed sometimes around 1204 AD.

In autumn the hills are a riot of colours. In Kinnaur there is a festivall of flowers – ‘Fuleich’ and ‘Sair’ in the Kangra area. Traditional fairs with buffalo duels take place in Mashorba near Shimla. You can simply put up your feet and see days go by, take a local tour for attractions that are not part of usual tourist calendar – it would be an unforgettable experience and memory to cherish.

In 2010, Dussehra festival will be celebrated from October 13th to -18th’ in Himachal Pradesh, INDIA. Toshali Royal View Resort, welcomes all to be the part of Dussehra a Festival experiencing, exclusive arrangement has been done for the guest to witness and be the part of the festival. For Dussehra Package Reservation click on http://bit.ly/9H62lF For more details write to metu@toshali.in

If you feel, we have missed any information that is helpful for your friends visiting this blog, do post. We would be glad to receive your comments and conversation.. Happy Dusshera festival.