In Hindu mythologies and rituals Gods and Goddesses are revered and loved just as family. Probably belonging to the bhakti yoga culture popularized by Shri Chaitanya Mahaprabhu – they wake up to strains of music, are offered prasadas, bathed, anointed with fragrances, dressed in finery and jewelry and fall asleep to lullabies. You can either view it as humanization of a deity or the acknowledgement of the Lord’s omnipresence.

In the Sree Mandir tradition of Sree Lord Jagannath, Puri there are altogether 24 beshas or Holy Attires or Ritual Costumes or  the Vastra Shringar of which 22 are used regularly while two beshas are used rarely. The Nagarjuna and Raghunath Besha. In all the attires or bhesas, Sree Lord Jagannath is the focal point except for the Pralambasurabadha Besha used to commemorate slaying of a demon of same name by Sree Lord Balabhadra.

The bhesas or the holy attires are:

This is done daily, after mangala arati. Abakash is the tooth brushing and bathing ritual. 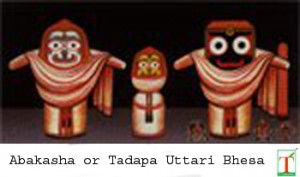 It is the nightly retirement dress. This is mostly made of different kinds of flowers and silk clothes. 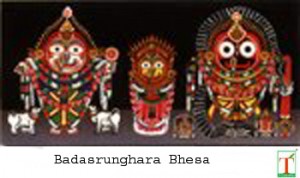 This bhesa is done for 42 days, beginning on Akshaya Trutiya. 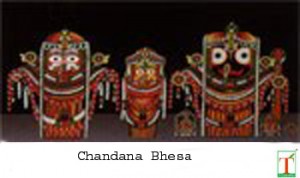 On the full moon day of the month of Jyestha, after the bathing ceremony is over, the Deities are dressed to resemble Lord Ganesha. 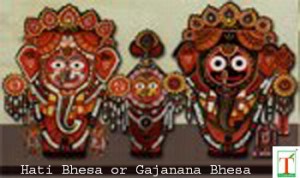 When the Deities return from the Gundicha Mandir on their chariots, they appear in the Golden dress. It is said that a darshan of the lord in Suna Bhesa frees one from the cycle of rebirth. 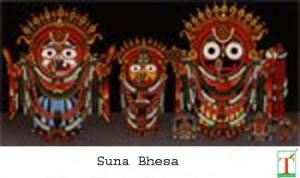 On the 10th day of the dark fortnight in Bhadra, the Lords are dressed for a picnic, like the cowherds. 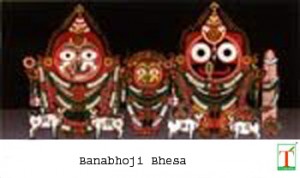 On the 11th day of the dark fortnight of Bhadra the Lord is dressed as Krishna the slayer of serpent Kaliya. 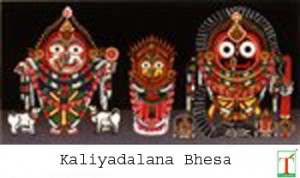 On the following day, the 12th day of the dark fortnight of Bhadra the Lords are dressed to commemorate Lord Balaram’s slaying of the demon Prahlamba. his is the only beshas when Lord Jagannath’s elder brother Lord Balabhadra occupied the central place. 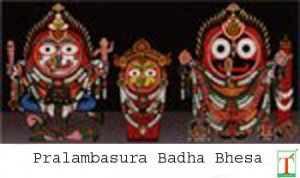 On the 13th day of the dark fortnight of Bhadra, the Lords are dressed as Krishna and Balarama. 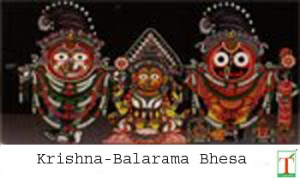 On the 12th day of the bright fortnight Bhadra, the Lord is dressed in the image of his reincarnation as Vamana, the slayer of demon Bali. 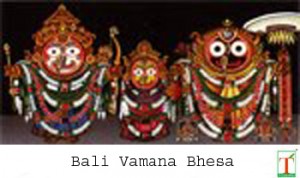 This bhesa is used on the 11th day of the bright fortnight of Kartika. 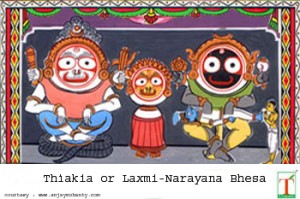 The curly haired make-up. Used on the 12th day of the bright fortnight of Kartika.

Attire used on the 13th day of the bright fortnight of Kartika. Used on the 14th day of the bright fortnight of Kartika. Attire on the full moon of Kartika. From the 9th day of the bright fortnight to the full moon of Jyestha except the 14th day, this dress is used. 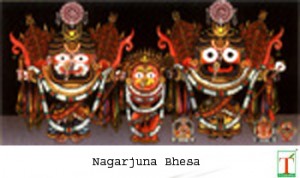 On Saturdays or Wednesdays between the new moon of Magha and Basanta Panchami. The dresses are made from lotus, sola lace and paper. On the full moon day of the month of Magha. It commemorates the story of Gajendra, the king of the elephants, and the alligator. Toshali Sands, Puri has exclusive arrangement to take you on visit to the “Sree Mandir” – The Lord Jagannath Temple, Puri Orissa ‘now called as Odisha”. To Know more, leave your comment or contact travel desk ‘metu@toshali.in, we will get back to you.

I would be glad to hear more about the Holy Ritual Costume or Attires or Bhesas, please post if you feel any information’s in the blog is missing. And would be gald to have you as their guest at Toshali Sands.