Virgin Sea Beach, Wild Sea and Sun along the soothingly beautiful Konark Marine Drive. Bollywood, Oriya and Bengali film and TV serial makers are increasingly thronging the place. Filmmakers should appoint a local coordinator to handle arrangements, including scouting for locales, equipments and local talents. Smaller productions can do with a local fixer. On request the resort itself coordinates and facilitates film maker guests. It is about 65 KM from Bhubaneshwar city and it takes about an hour and a half by car to reach the resort from Bhubaneshwar airport. 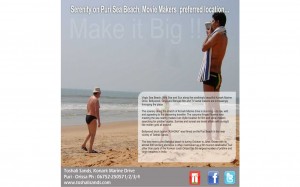 You can call up the coordinator at the resort near by and arrange for a car pick up from the airport The scenery along the stretch of Konark Marine drive is stunning – its raw, wild and appealing to the discerning traveller. The casurina fringed Nuanai river meeting the sea nearby makes it an idyllic location for film and serial makers searching for pristine locales. Sunrise ansd sunset are lavish affairs with molten gold all around!

The adjacent Balukhanda sanctuary is also home to the shy and elusive Baliharina deer (Indian Blackbuck). It is rarely seen these days – you might get lucky. The Olive Ridley turtle – besides having a glimpse in the nearby research centre you may be lucky on a night during the nesting season when thousands of these turtles come ashore to lay eggs. The Bhitarkanika sanctuary is the largest nesting place of this turtle – over 6 lakhs throng here annually.

To site an example, one of Bollywood block buster “ASHOKA” was filmed on the Puri Beach in the near vicinity of Toshali Sands.

The best time to visit Balighai beach is during October to June. Orissa with its almost 500 km long shoreline is often overlooked as a film tourism destination, but other than parts of the Konkan coast Orissa has the largest number of pristine and virgin beaches in India. You won’t be chased by a hawker, won’t find a supermarket there – just the sea and sun and sand – whistling wind. A quaint old jeep used to drop and pick up guests of Toshali Sands to and from the Balighai beach. Now,  it has been replaced by fuel efficient The resort also provides a life guard and umbrellas, mats and towels on the beach. The beach is a bit rough during high tide but amazing during low tide – so find out the time from the resort to make your own movie. Its also the photographer paradise…

I would love to hear, your script getting filmed at Puri Sea Beach. Which are the movies, TV Serials, Documentary films were made here at Puri Sea beach