The erstwhile religious capital of the Chandelas, Khajuraho comes alive with its annual Dance Festival in February/ March. It takes place in an amphitheatre in front of the Chitragupta Temple and the Vishwanatha Temple dedicated to Lord Shiva. They are part of the Western Group of temples. These are some of the largest, well maintained and easily accessible temple(s) in Khajuraho. The festival started in 2002. Already this weeklong festival has carved a niche for itself with its classical dance performances, presented in the backdrop of the stunningly illuminated temples. 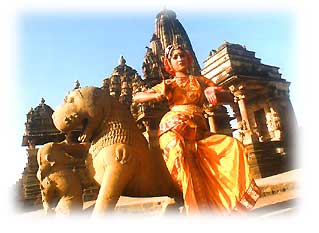 Some of the best artists participate in the festival and the performances include the traditionals – Kathak, Bharathanatyam, Odissi, Kuchipudi, Manipuri, Kathakali and off late more modern dance forms

The programmes are held against the spectacular backdrop of the temples. Classical Dance and Music in India was nurtured and developed in the temples. Diverse forms of classical dance matured and evolved in the temples. So a temple as a backdrop to a dance festival is a form of tribute to temples in ancient and medieval India which were focal points of art, culture and learning besides religion.

Along with the performances, craftsmen display their wares in an open market nearby. This year the festival will be opened on February 25th with Bharatnatyam rendition of Hema Malini accompanied by her 2 daughters – Esha and Ahana. This is the first time the famous actress will perform with her daughters.

Event details may change. Please check with the organisers or with your Travel planner that the event is happening before making travel arrangements.